How to groove a reliable stroke  • From Golf Digest •

Back in the day, golf course superintendents didn’t have access to the agronomy techniques we do now. Greens were slower, so you needed to pop the ball pretty aggressively to get it up and moving. Green conditions have changed since the 1950s, but the same putting principles are commonly taught, and they don’t promote the more flowing stroke you need today. Break the three myths shown here to take the hand action out of your stroke, and you’ll make more putts.

‘Grip it in the lifeline’

Instead: hold it in your fingers (see photo above). If you had to have surgery, would you want the surgeon to hold the scalpel in the palm or fingers? If you follow the age-old advice about placing the putter grip along your lifeline (far left, inset), you not only rob yourself of feel, but you encourage a rotation of your left forearm under your right (far left). This affects your aim and prevents you from moving the putter on an arc.

The fingers are where your feel is, and if you grip the putter in them, anchored under the pad at the base of your left palm (inset, left), you have more leverage and control of the putter. Your left and right thumbs should line up on the top of the putter grip. From this position, your forearms are parallel to the target line (left), and your wrists are less likely to break down.

‘Set your eyes over the ball’

Instead: eyes inside the line. It’s important to see the line during the stroke, but the stock advice you’ve been getting about how to do that is misleading. If you set up with your eyes directly over the ball (inset), your hands get trapped beneath you, and the stroke has to get wristy to compensate. The putter head moves outside the target line and shuts on the backstroke, and you have to manipulate it coming through the ball.

Your posture should be athletic and relaxed. Stand up straight, and drop your hands loosely to your sides. Now hold the putter so the sole is flat on the ground. You’ll be tall and relaxed, and your eyes will be inside the ball (left). If you bend over first, then drop your hands into position to hold the club, as many golfers do, your arms will be trapped. From the taller position, your arms will be freer to swing and rotate, and your hands won’t have to get involved. You’ll also have an undistorted view of the line. 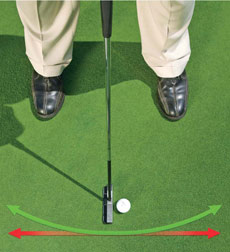 Instead: let the putter trace an arc. Intuitively, it might seem like moving the putter straight back and through would make the ball roll on target, but we stand to the side of the ball and the shaft is at an angle to the ground. The putter has to swing on a slight arc to work the way it was designed. Then, the face of the putter stays square to the arc and sends the ball on target without forcing you to twist the club to get the face square at impact.  With an old-school, hunched setup and a wristy pop stroke, straight-back straight-through would work. On today’s faster greens, it requires too much coordination and practice. It’s much easier to be consistent with an arc.