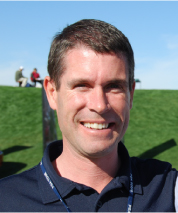 I would like to welcome you my website and give you a quick back story about how I began teaching.  Little did I know that in 1987 as a high school senior, a knock on my door from Bing Crosby’s son, Nathaniel, would help shape my destiny.  He asked me if I wanted to caddy at the AT&T Pebble Beach Invitational, the very one his father started, for his brother Harry.  I of course accepted!

Harry’s partner that year was Payne Stewart. Payne ended up losing the tournament late to Johnny Miller as Harry and I watched helplessly from a few feet away.  Needless to say a very cool experience for a seventeen year old!  I later saw Payne that June at my home course, The Olympic Club, for the US Open.  He was nice enough to remember me, and I followed him for two days.  In the gallery I met his mom, Bee, and we had a good time chatting.  Later that summer, a friend and I went to PGA National in Florida for the PGA Championship.  I walked and talked with Bee for four days and we became fast friends.

Over Christmas break, Bee invited me to Springfield, MO, to spend time with her, Payne, Tracey and the whole family.  I got to know Payne a little better then and over the years, as I became less of a starstruck kid and more of an adult, our friendship became more real.  I had access to one of the greatest players of all time and watched him play and practice quite a bit.  It all culminated in that heartbreaking loss at Olympic in ’98, followed by the pure bliss of Pinehurst in ’99.  One of the more surreal experiences in my life was drinking out of the US Open trophy later that night!  I will forever miss my friend Payne.

A funny thing happened in ’99.  Payne went from a very streaky putter to a very good one day in and out.  He started using a SeeMore putter that year and the transformation was startling.  I of course started using one and loved how the alignment system worked.   To learn more, please visit www.seemore.com.

Through his caddy and one of my closest friends, Mike Hicks, I met the owner of the company after Payne died and he hired me to work on the Buy.Com Tour in 2000.  I owe a lot to Jim Weeks, the inventor of the putter, for giving me my start in the business.  Since the instruction for use of the putter is interactive, I was afforded an opportunity to work one-on-one with some of the best players in the world.  I was never a good enough ball-striker to compete professionally, but I had a great short game.  When I started to analyze why, my theories about putting began to take shape.

That same year I met Vaughn Taylor and Zach Johnson, although Zach and I didn’t begin working together until the following year.  One could say that we all grew up together in golf and the better they played and putted through the years, the smarter I looked!  In 2002 I became a newlywed and began teaching full time as I didn’t want to travel so much anymore.  When Zach won The Masters in ’07, Lakewood Country Club in Dallas snatched me up and I have now what is truly my dream job.  I am completely blessed.

What I shared with Zach and VT has certainly evolved and been refined, and today I believe putting all comes down to fundamentals of set up.  I can correct almost anyone’s stroke without focusing on their stroke.  On this site, I will offer those fundamentals, as well as some nuances you might not have heard before.

In addition to Zach, I have helped KJ Choi win The Players Championship and Kelly Kraft win The US Amateur in 2011.   I have worked with numerous PGA Tour players, including Stewart Cink and John Senden.   I am equally if not more passionate about helping you improve.

My motto since I started teaching has been that “Putting is a very simple motion made complicated by an incorrect setup”.  Anyone can stand relaxed, put their hands together without a putter, and move their hands, arms and chest.  When the putter goes in the hands, then things change.  The posture might become slumped or the head may get cocked, therefore distorting the eye-line, etc.

For far too long, in my opinion, fundamentals in putting have received a free pass.  I was told to “just do whatever is comfortable”.  Unfortunately, that was bad advice.  The greatest pressure putter certainly in my generation, Tiger Woods, had rock solid fundamentals (His grip and pressure have certainly diminished his skills).   Zach has always had them. I don’t think it is any coincidence that their strokes have held up because they haven’t had to make any compensations to square the putter at impact.

You may not have the talent of Tiger Woods or Zach Johnson, but it does not take any talent to set up correctly to the ball.  The fundamentals are grip, alignment, stance, and posture.  I will offer these in depth on this site through various mediums.  When you have a bio-mechanically correct setup, where all your lines are parallel and square to the target, the putter is designed to swing on an arc and return to square automatically.  When that is the case, you can be into the target and not worry about the mechanics.  Instincts can take over and putting becomes free and the art that it should be!  So don’t fix your stroke, fix your set up!

This philosophy can also be extrapolated out into the short game and the full swing.  I am very passionate about establishing a neutral foundation with the correct spine tilt and level hips.  I am equally passionate about changing your golf swing in the gym and not on the range if you want to reach your full potential.  Block practicing, where you hit balls for hours, gives you a false sense of accomplishment.  Unfortunately, it doesn’t necessarily carry over when you step onto the first tee.

On my site, I intend to present you with the most EFFICIENT way to improve.  I readily acknowledge that there are many ways and swing theories that will help you get better.  Perhaps you have tried a lot of them.  To me, a good swing that can repeat without a great deal of effort and timing comes down to four things.  They are, in order:

To play your best golf, you must allow movement to happen.  If you “try” to do certain things, that is tantamount to effort and therefore tension.  I believe I can present a better way for you.  My way, while simple, is certainly not easy.  I just happen to believe that you pay for everything up front: getting your body in shape, establishing neutral angles at setup and rehearsing and practicing properly.  The reward is then Free Motion Golf.